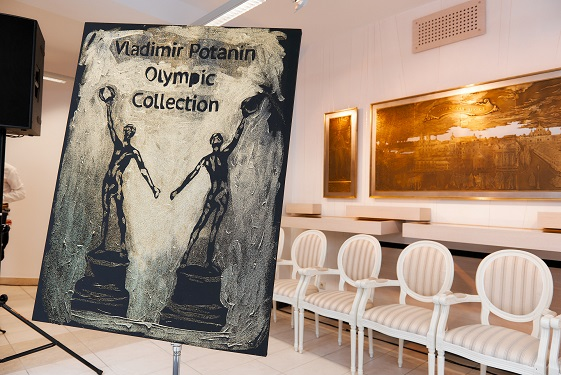 Of the Olympic Collection’s nearly 400 objects, 64 were selected for the show, including gold, silver, and bronze medals and commemorative awards, torches, winners’ diplomas, award pins, trophies, figurines, and bugles from the Games over the years.

Over three weeks, visitors will see sports artifacts from Games held in 1896 through 2014. The oldest artifacts on display in Minsk are medals from the 1896 Games in Athens, the first modern-day Olympics. It was then that the ancient Greek tradition of holding an athletic competition every four years was reborn.

In addition to the medals, the Minsk exhibition contains diplomas given to Olympic Games participants from 1900 onward. These documents are extremely valuable, as it is no easy task to preserve paper relics in good condition. Some of them have undergone restoration, for example a gilded participant diploma from the 1936 Games in Berlin. These diplomas, designed by some of the finest artists of the day, are true works of art.

A team of experts from Russian International Olympic University (RIOU) has been managing the series of exhibitions. At the opening of the exhibition, Lev Belousov, academician and rector of the University, noted that the collection is unique in three ways:

“First, the artifacts have unique artistic value, as the awards reflect artistic trends from the end of the XIX century to the present day. Second, the collection has tremendous historical value, as it contains artifacts from every modern-day Olympic Games, memorabilia that bear witness to every sporting event. Third, the collection has an educational function. Through this collection, every visitor can reflect upon the history of the international Olympic movement by accessing the written commentary, photographs, and videos that accompany each exhibit.”

Janez Kocijančič, the President of the European Olympic Committees, was one of the first to visit the exhibition. He emphasized the significance of the collection for the Olympic movement, saying:

“I am greatly satisfied in the knowledge that this important exhibition will be held in Minsk during the European Games. The significance of the collection can not be overstated: it showcases the achievements of world’s athletes across more than a century. I am very grateful to Vladimir Potanin for funding it.”

Presumably, exhibitions from Potanin’s Olympic Collection will continue to travel to the sites of major sporting events: the Olympic Games, the Asian Games, and other multi-sport events.