Events
31.01.2017
VLADIMIR POTANIN: WE EXPECT TO BECOME THE MOST EFFICIENT METAL MINING COMPANY 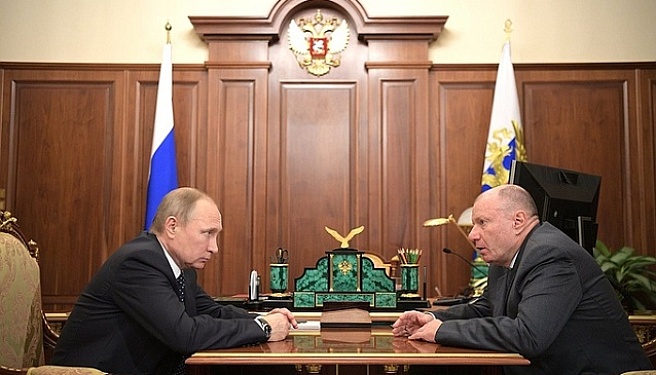 Transcript of the meeting (unofficial translation from Russian http://www.kremlin.ru/events/president/news/53796)

President Putin: Vladimir Olegovich, how was your company’s performance for the year?

Vladimir Potanin: Last year was not an easy one for us, but we had good results. We embarked on a  development program that will last through 2023. Once implemented, it will lead to a 50 percent increase in the production of ore, and will almost double our enrichment volumes. We will conduct a profound modernization of our production capacity, which will make Norilsk Nickel production facilities the largest and most art in the world. We expect to become the most efficient metal mining company.
Additionally, the upgrade will help us solve environmental issues. By 2023 we plan to reduce air pollutant emissions by 75 percent.
Mr. President, we have been doing this work while keeping social stability. To maintain stability among personnel, and meet our obligations under the agreements with the unions, Norilsk Nickel will create some three thousand additional jobs to make sure that the upgrades do not lead to social tensions. That will require approximately 1 trillion rubles of investments, 250 billion of which will go towards environmental protection programs.
We hope to successfully accomplish those goals with some support from the government, as is necessary for such and ambitious initiatives.
At the same time we are not staying still, we have begun addressing the environmental concerns. Specifically, last year we took a nickel plant in Norilsk city out of operations, bringing air pollutant emissions within the city limits down by 35 percent. This is only the first step. As I mentioned earlier, we expect to fully resolve this issue by 2023.

President Putin: How is your company’s employment situation? Are you downsizing or hiring? What will happen as a result of the technology upgrades, your planned new machines? What will the labor market be like once the new technologies are deployed?

Vladimir Potanin: Vladimir Vladimirovich, this is a very sensitive issue and we give it a great deal of attention. Over the past 10–15 years our employees have changed. Today our employees have become much more demanding, requiring broad band internet, the provision of services in the city, sports, entertainment, movie theaters. We work on it a lot.
On top of that, because of the technology upgrades we need to retrain people to improve their skills. For example, when we took the nickel plant out of operations we were able to move 1600 people to work in other facilities. Out of 1600, 1000 were retrained and approximately one half have even acquired new professions.
President Putin: In connection with this, how are your relationships with the regional authorities, may be even with the authorities on the federal level? Do you have a common work plan?

Vladimir Potanin: To be completely frank, as of today we have not yet come up with an effective common work plan.

President Putin: You should have one.

Vladimir Potanin: I agree with you, Vladimir Vladimirovich, as things stand we use experts from almost every region [of Russia]. We, when possible, invite qualified people from all regions to work [for us], we create [favorable] conditions in Norilsk, provide housing either in a dormitory or an apartment, and we try to create a more or less dynamic market. The problem used to be that people would want to come to Norilsk for 3–5 years to make some money and then leave for the mainland, and then it turned out that many stayed for good. We want to give people an opportunity to work in Norilsk for as long as they want to stay, while also keeping other options open, so that if their family situation or other circumstances change, they could change jobs and move to more hospitable areas.
We have a special mainland resettlement program, and every year we allocate a significant amount to the program’s implementation, we resettle up to 500 people, help them find new housing.

President Putin: What are your average salaries?

Vladimir Potanin: Our average salary is over 90 thousand rubles, among the highest in the country.

President Putin: In terms of resettlement and jobs for people leaving the company, it is necessary to work directly with the regions and with the federal authorities.

Vladimir Potanin: I agree, Vladimir Vladimirovich, we will work on it.

President Putin: I will also speak with the Governor about this.