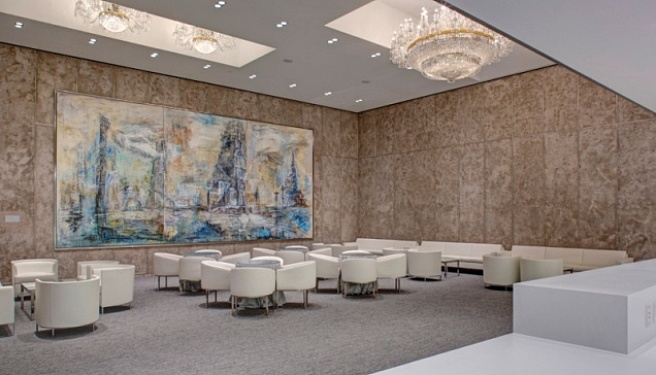 In 2011 Vladimir Potanin made a donation to the Kennedy Center for the Performing Arts to celebrate the Center’s forty year anniversary. As a result of the collaboration between the Foundation and the Center with the support of the Embassy of the Russia to the US a reconstruction of the largest Lounge of the Center took place.

In 2014 the Russian Lounge was launched. The idea of the creators was to generate a new space that would symbolize outstanding achievements in the area of music, ballet, opera. At the same time the Russian Lounge should reflect the contemporary scene of the Russian culture. Authors of the project — architect Sergey Skuratov and painter Valery Koshlyakov from the very beginning had warned that there would be no Russian matryoshkas, Russian bears in the Lounge. They wanted to avoid stereotypes and to come up with new original artistic findings.

Architect Sergey Skuratov: «We are immensely grateful to all project participants, starting from those who make decisions to those who implemented the project considering every single detail. Judging by people’s reaction who visited the Lounge I think we have managed to realize what we had envisioned. Although I am not the one to judge as the architecture speaks to people through senses and emotions. The most important goal we wanted to reach is to envision the future. We dreamt that this space would transfer us to a brighter future, when all problems have vanished and there would be beauty, harmony and prosperity. This kind of Russia we carry in our hearts.»

The Kennedy Center Board of Trustees enjoy conducting sessions in the Russian Lounge. The later is also always open for concerts of the U.S. National Symphonic Orchestra and of the Washington National Opera.

Philanthropist Susan Lehrman: «I am very much honored to celebrate this one year anniversary of cultural development between Russia and the U.S. The Russian culture has always played a big role within the world artistic context. Let us recall Tchaikovsky’s Swan Lake,Chekov’s Cherry Orchad, an amazing voice of Anna Netrebko. The Russian Lounge at the Kennedy Center of the Performing Arts evokes a special feeling — this is a friendly environment for reflection and contemplation».

At the Kennedy Center there are also African, Asian, and Israeli lounges, and the appearance of the Russian lounge within this raw is crucial not only from a cultural point of view but also from a diplomatic one.

«In this Lounge many important guests hang around, as it is located at the same level, where the theater boxes of the Washington National Opera are placed», — emphasized curator of the project Natalia Zolotova, having added that «this is a common Russian-American cultural space». In his turn, H.E. Ambassador of the RF to the US Sergey Kislyak was confident that the Russian Lounge would enable to attract to the Kennedy Center more Russian musicians, singers, ballet dancers and would develop fruitful bi-literal relationships in the area of arts and culture.

General Director of the Foundation Oksana Oracheva:"We support cultural initiatives aimed at cooperation and experience exchange, providing grounds for dialogues and partnership, forming positive image about Russia. We genuinely believe in the power of culture as today the culture plays role of the Ambassador that connects people across the world. The Foundation’s mission is to provide practical support to culture that step by step should lead to positive social changes. The project Russian Lounge embodies this idea and unites creativity and innovation, collaboration and leadership. It is impressive how the space has changed recently. In 2011 namely here in the Russian Lounge Vladimir Potanin expressed his intention to donate 5 million dollars to the Center. The Russian Lounge looked absolutely different at that time. Over the last few years the space has changed not only externally but internally, it has filled up with new context, enabling to present the great history and culture of Russia with good grace. By the way this year we expand our activity in this area, having decided to provide additional support to the Kennedy Center in the field of educational programs that would help to get to know more about Russia.

A group of Russian museum professionals participating in the Russian — US bilateral training program were at the reception of the Russian Lounge anniversary. Museum specialists from Moscow, St. Petersburg, Krasnoyarsk, Yekaterinburg, Voronezh are getting acquainted with the work of their colleagues from New York and Washington, attending lectures of leading specialists, curators. Next winter American museum professionals will make a reciprocal visit to Russia. The bilateral training program will be expanding. Currently new applications are coming for the Russian-German program.

The reception at the Russian Lounge was completed with a small concert of the vocal pieces of Sergey Rakhmaninov, performed by young American artists, winners of the competition Domingo-Cafritz, which also once again reminded of the common cultural space