News
14.09.2016
CENTER POMPIDOU AND THE VLADIMIR POTANIN FOUNDATION TO OPEN AN EXHIBITION IN PARIS 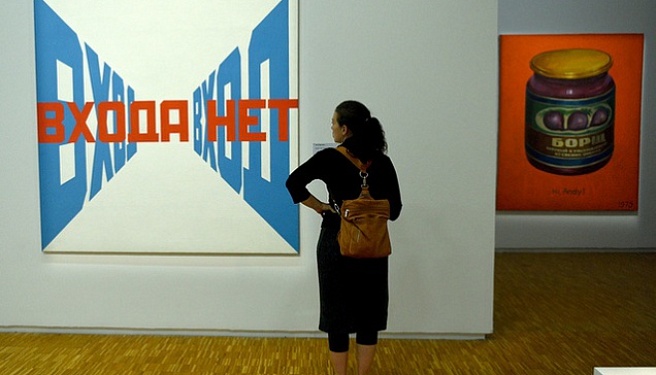 The «KOLLEKTSIA! CONTEMPORARY ART IN THE URSS AND RUSSIA 1950–2000. A MAJOR DONATION» exhibition opened at the Pompidou Center on September 13, 2016. A collection of Russian art of the second half of the20th century, unprecedented in scope, was initiated by and assembled with the active participation of the Vladimir Potanin Foundation, and in close cooperation with philanthropists, art collectors, and artists. Under a joint project of the Vladimir Potanin Foundation and the Pompidou Center, the Center became the owner of one of the best collections of Russian and Soviet modern art for the period from 1950 to 2000.

The collection will be on view for six months. The exhibition includes more than 250 artworks by 60 artists and various artistic movements. Several public events will be held in conjunction with the exhibition.

Up until now, Russian art abroad has mostly consisted of Russian , and contemporary art has not been given its rightful place.

«Historically there has been very little Russian art in the museums in the West, and modern art is an even smaller part of the museums’ holdings. This collection represents contemporary Russia — a vibrant, evolving European country» — says Mikhail Shvidkoy, Russia’s Presidential Representative for International Cultural Cooperation.

Oxana Oracheva, the Foundation’s Director General, says that the project is a part of the Culture Breakthrough Program that has grown out of the successful exhibitions of the past few years and aims to promote Russian culture abroad. Past exhibitions include When Russia Spoke French: Paris — , 1800 — 1830 at the Army Museum in 2003, and Russia! at the Solomon Guggenheim Museum in New York in 2005.