News
04.09.2019
The Ministry for the Development of the Russian Far East and Arctic, Rostourism, the Government of the Kamchatka Region, and the «Three Volcanoes Park» signed a strategic cooperation agreement. 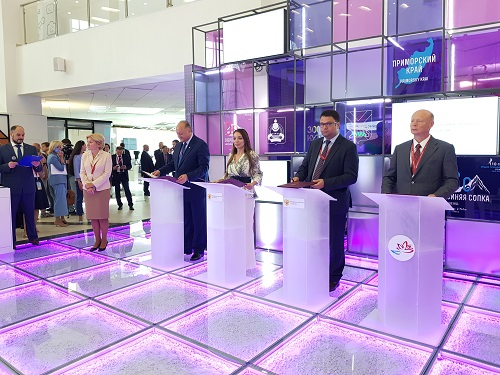 Sergey Tyrtsev, First Deputy Minister for Development of the Russian Far East and Arctic; Zarina Doguzova, head of Rostourism; Vladimir Ilyukhin, Governor of the Kamchatka region; and Sergey Bachin, Chairman of the Board of the «Three Volcanoes Park», signed the strategic cooperation agreement at the Eastern Economic Forum in order to launch an investment project to create a  resort and recreation infrastructure around the Mutnovsky, Vilyuchinsky and Gorely volcanoes of the Three Volcanoes Park.


The project’s conceptual framework is a  partnership in the Kamchatka Advanced Development Territory. The project’s estimated costs total 39.2 bln rubles, of which 15 bln will come from private investors. The money will be spent on the construction of tourism infrastructure and to create a network of environmentally friendly trails in the natural area rich with Kamchatka’s main attractions, including the observation deck next to the Vilyuchinsky volcano. Under the development plan, a 1000 room resort, 17 kilometers of alpine ski runs and two cable cars will be built next to the Goryachiy hill. Cable cars will operate year round and will carry all visitors taking tours of the Three Volcanos Park. The government will provide transportation to the resort and utility connections.


Sergei Tyrtsev, First Deputy Minister for Development of the Russian Far East and Arctic, said: «The new tourism cluster on Kamchatka will certainly revive the economy of the region. This investment project will create the right pathways for regional development, enhancing its competitiveness, attractiveness and ensuring greater accessibility for people from Russia and other countries.»

Rostourism supports the idea of creating the Three Volcanos Park in Kamchatka. Zarina Doguzova, the head of Rostourism, said that the project should attract tourists to the region.


«In order to implement a project of that scale, we will need to consolidate efforts on all levels, from federal to the regional. On our side, we will do all we can to help. According to our Agency data, by 2037 the tourism cluster will attract up to 460 thousand visitors. Between 2024 and 2037, this may bring more than 135 billion rubles in additional revenues to the region’s economy» — said Zarina Doguzova.


Vladimir Ilyuchin, the Governor of the Kamchatka region, noted that
«Local residents will benefit first hand from a resort being built at the Three Volcanoes Park because it will create jobs, put more money into the budget, and contribute towards regional infrastructure development. Additionally, Kamchatka’s nature is uniquely beautiful, and thousands of people dream to see it. This project will provide an impetus to increase tourism to our peninsula.»


Vladimir Potanin’s Interros Group and the entities of Sergey Bachin, Director General of Rosa Khutor, registered the «Three Volcanos Park» in June, 2019 to develop the new tourism cluster in Kamchatka. The cluster will include 12 different sites around the Vilyuchinsky, Mutnovsky, and Gorely volcanos, with access to Vilyuchin Bay.


Sergey Bachin, Chairman of the Three Volcanos Park’s Board of Directors, said that «implementation of this project may bring about a real breakthrough in tourism. In terms of its diversity, Kamchatka is richer than similar, areas elsewhere in the world, and our main goal is to fully develop its potential and make the region accessible and interesting to Russians and people from other countries. We estimate that on an annual basis, the Park will host more than 400 thousand visitors and our hope is that they will keep coming back to Kamchatka».