News
02.06.2020
The Three Volcanoes Park LLC to Become the 100th Resident of the ASEZ Kamchatka 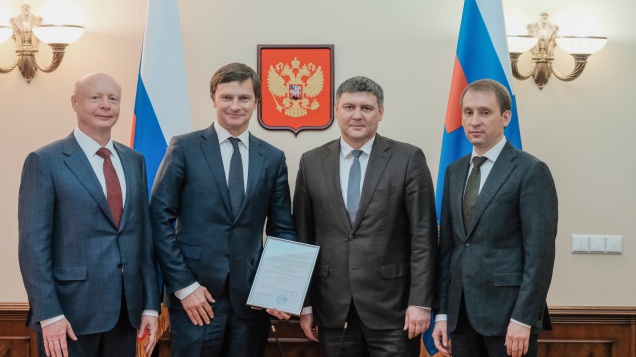 On June 2, Dmitry Tetenkin, Director General of the Far East Development Corporation JSC and Dmitry Okorokov, Director General of the Three Volcanoes Park LLC, signed an agreement on implementation of activities in the Kamchatka ASEZ. The agreement was signed in the presence of Deputy Prime Minister Yury Trutnev, Minister for the Development of the Russian Far East and Arctic Alexander Kozlov, Chairman of the Board of Directors of the Three Volcanoes Park LLC Sergey Bachin.

The Three Volcanoes Park LLC will build a world-class tourism cluster in the area of Vilyuchinsky, Mutnovsky and Gorely volcanoes, with access to Vilyuchinsky Bay.

Investments in the project total 15 billion rubles until 2028. These funds will be invested in tourism infrastructure and ecological trails along the natural sites where the main attractions of Kamchatka are densely represented, with an observation deck near the Vilyuchinsky volcano. A resort with 1000 hotel rooms, 17 km of ski slopes and two cable cars will be created near the Goryachaya hill. The resort will be available to all visitors of the Three Volcanoes park all year round in excursion mode.

The State and investors consolidated efforts to build a new tourism cluster which contributes to the development of the entire Kamchatka Territory. Il will create 900 new jobs and new engineering and transport infrastructure facilities. The regional budget will receive additional revenues.

«Today, 2 379 investment projects are operating in preferential regimes in the Far East. And it is quite obvious that we do not sign each project in such a composition. Nevertheless, in this case, I believe that this is absolutely justified and correct, because it is a special project ... At the same time, you can see it now only in a “wild way”: there are not enough hotels, trails, service ... And now we must do everything possible to create holiday destinations for our citizens in Russia. Kamchatka is a unique opportunity. I wish investors every success! We will definitely work together with the Russian Ministry for the Development of the Russian Far East and the Government of the Russian Federation, to ensure that this project takes place», said Yury Trutnev, Deputy Prime Minister of the Russian Federation and Plenipotentiary Envoy of the President of the Russian Federation in the Far Eastern Federal District.

«Kamchatka is an amazing land. This is not only the patrimony of our country, but of the whole world. Therefore, our common mission is to create a world-class resort while maintaining a balance of nature. It is not an exaggeration to say that today's agreement will change the future of the entire region. After all, a huge point of growth is being created, the basis for the development of tourism services, the development of such a format as public-private partnership. And all this is in the Far East», said Alexander Kozlov, Russian Minister for Development of the Far East and the Arctic.

«Obtaining the resident status of Kamchatka ASEZ will give a boost to the project. The creation of a world-level resort can be an absolute breakthrough for the peninsula from a tourist point of view. Kamchatka enjoys a unique natural diversity, and our main task is to reveal its full potential, to make the region accessible and interesting for both Russian and foreign tourists. We expect that more than 400 000 people will visit the park annually», said Sergey Bachin, Chairman of the Board of Directors of the Three Volcanoes Park.


The Advanced Special Economic Zone «Kamchatka» was created by Decree of the Government of the Russian Federation No. 899 as of August 28, 2015. It is located in the Kamchatka Territory. This is the most solicited of all the Far Eastern ASEZ; as of today it has 100 residents. An even greater number of investors - 153 - took advantage of the free port zone, which is extended to Petropavlovsk-Kamchatsky. The overall cost of projects announced by residents of the ASEZ and Free port of Vladivostok is about 150 billion rubles. The projects are expected to generate near 12 000 jobs.

The Three Volcano Park LLC was established by Vladimir Potanin's Interros group and the entities of Sergey Bachin (Chairman of the Board of Directors of the Rosa Khutor resort) to develop a project for a new tourism cluster in Kamchatka. It includes 12 different facilities in the area of the volcanoes Mutnovsky, Vilyuchinsky and Gorely, with access to Vilyuchinsky Bay.
Topics"Three Volcanoes" Park